*Archive re-post! From my now retired personal blog, The Unconventional Newlywed, which was published from 2012-2018.

Do you want to know why it is hard to be married and a broke graduate student these days? Because America is a mean place to live.

We can all blame this guy: 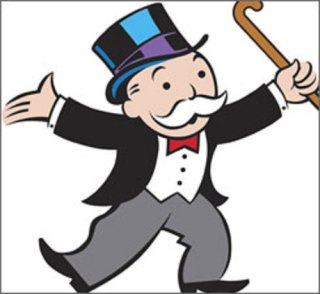 Don’t be fooled by his gentle, grandfatherly appearance. He is a ruthless hope killer who represses the weak and bolsters the rich. HE IS THE MAN. Damn the man!

This week I learned how to play Monopoly. Have you ever played Monopoly – the real way? All of my childhood I thought the game was an endless loop about the board, trying to avoid jail and roll doubles every time.

There is money exchanging in the real game. A little economy between players. Who knew?!

I didn’t. Alex taught me (chalk up another point for the husband).

Here’s the catch – the game of Monopoly is just as is sounds. A quest for MONOPOLY.

It is unethical! Illegal!

Especially with only two players, it is inevitable that one player will dominate the board slowly driving the other into defaulting on mortgages and selling little plastic kidneys just to pay for utilities.

Is this America or what? And the game is not even ashamed. Official rules of the game state, winning is not only amassing wealth but making all other players bankrupt.

This game is bad for mental health. Unless your a trust fund baby zooming through life on your daddy’s little tin race car, you’re doomed to an existence of overextended credit.

That said, 3 out of the 4 games Alex & I have played I bankrupted Alex. It’s a terrible thing to watch your partner sink into unresolvable debt while your piles of $500 bills lay watching in ennui.

‘Murica. The land where you don’t lend your neighbor money cause you want him to be tortured by the mob in attempt to draw loan repayment from his blood. Fuck yeah. Now I buy a hotel.

Speaking of the greatness of American commercialism, have you all seen this commercial?

It hurts my heart. And not in the way that Prilosec can fix.
Some days, the relentless pursuit of mindless wealth makes me want to quit life and turn back into a monkey.

Other days, I play Monopoly, kick Alex’s ass and think,

“My, what a terrific guy this Alex is.  He lets me win Monopoly without pouting! He is not threatened by any potential or existing successes of mine. He supports me going to school full-time while he works crazy hours. Hmm, he even job hunts for me.”

“He’s OK with me being the breadwinner.”

Then, I get stressed out by all the pressure and have to leave the game to eat a slice of pumpkin pie. Then I return to give Alex a hug and feel less stressed and a bit more inspired.

As much as I don’t want to be part of our ubercapitalistic society, is it comforting to know that someone around here truly thinks I can succeed in this rat race.